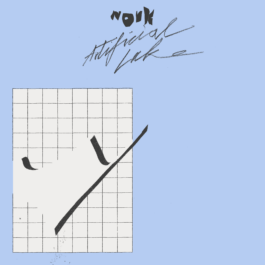 NOUK is an indietronic & chamber pop band around Anna-Lucia. The band breaks with classic song structures without losing the charm and lightness of honest pop music. Sometimes string lines interweave with guitar and vocals to create a filigree poem setting, then drums, synth basses and circulating piano patterns build up into complex arrangements. Different influences merge in a very natural way to create a multi-faceted overall sound. While the 21st century circles around our heads, NOUK creates a very own orbit with their upcoming album "Figures Afloat", which takes up the environment, but also spins it on in a thoughtful and imaginative way. You flow through the music, discovering colors, textures and landscapes that you want to sink into and yet you never loose the thread, the connection to reality and the connection to the core characters in "Figures Afloat": the people who are close to you. 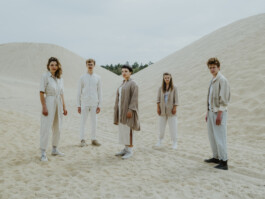 "Artificial Lake" is a song about shaking up and wanting to unleash.
At the center of the narrative is a person who has lost touch with reality. It’s about heavy liquids, unresolved emotions and building up a wall around the own body, preventing it to fall apart.
The "artificial lake" is a metaphor for all the sadness and depression the person has accumulated inside, as well as the alcohol he pours on top of it. His body is like a dam that is about to burst, but it keeps accumulating more and more sadness, depression and heavy liquids, slowly poisoning itself from within. He keeps turning in circles around the same trains of thoughts over and over again, not being able to escape the wicked mental pattern.
In the song, an “intangible mess” is described, an emotional chaos that one is no longer able to see through. And yet you only wish that the dam would break, that the flood would wash everything clean, and that you would finally be able to meet and understand each other again. He tries to hold it all together, but it starts to crumble slowly and I observe it with relieve, fear and disturbing anticipation.