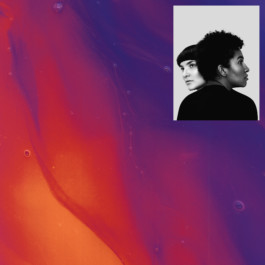 There are no clear archetypes or distinct predecessors for Olicía’s very own musical aesthetics. Heavily based upon voices and loops, augmented by both electronical and acoustic instruments, all of which they channel into surprisingly immediate, concise and emotional pop songs. Fragmented, electronic Soul or Gospel, playful multilingual Global Pop, the deep emotion of Folk Music, and a Jazz-like approach of creating everything on the spur of the moment. There are no preproduced elements in their production process on stage and even fully improvised songs regularly find their way into their live shows.

Olicía is the band of Fama M’Boup and Anna-Lucia Rupp. They live in Berlin and Copenhagen, Denmark, and share a common base in Dresden, Germany, where they met studying music, founding their own label o-cetera soon after. The two are also members of Sophie Hunger’s current band supporting her latest album “Halluzinationen”.

“Liquid Lines”, the debut album by Olicía, arrives after two Eps in 2018 and 2019 and countless concerts in the last years. It was recorded with Miles Deiaco at Monoton Studio, Berlin, and will be released on October 1st 2021. Guests on “Liquid Lines” include experimental French harpist Laura Perrudin, Drummer Demian Kappenstein (ÄTNA), and the songwriter and bass clarinetist Wencke Wollny (Karl die Grosse).

“Liquid Lines” is going to take on two different forms. There will be a regular 10-track digital album on streaming services, whereas the physical album is going to be a 20 track/two disk affair: each Lp or Cd functioning as an entirely different version of the album with regards to lyrics, instrumentation, grooves, collaboration partners, or even language. It makes for a listening experience that is quite unique: Immersing oneself in the dreamlike variations of these songs as the two women are emphasizing, obscuring or replacing certain elements, oftentimes actually veering off into something completely new and unexpected. That’s how Fama and Anna-Lucia would like this album to be understood - as a reflection on the liquid lines of demarcation of what constitutes a song. And - in the grander scheme - the infinite possibilities that constitute art and life itself. The “Liquid Lines” of tweaking and amending, bending and adjusting, of thinking, unthinking, and rethinking the same thing.

The Songwriting across “Liquid Lines” ranges from the elegant minimalism of “Texture of Words” – the only track to be released digitally and set to video in both album versions – to the exuberant rumble of “Go Go Go”, for which Olicía have collaborated with the renowned French harpist and songwriter Laura Perrudin. Perrudin - one of their favorite musicians - has contributed percussive structures on her unique electronic chromatic harp to the song, which celebrates femininity and female selfdetermination from a very personal perspective. In their own attempts to describe their musical approach, Anna-Lucia Rupp and Fama M’Boup like to use colors, seasons, moods, or tiny gestures. One could also describe it as a continuous tearing down of borders by two female voices.

"Liquid Lines" was nominated for the German Jazz Award in the category Best Debut Album in 2021.

All songs written by Olicía (Anna-Lucia Rupp and Fama M’Boup).
Recorded during 2020 and 2021 at o-cetera studios, Monoton Studio and Kaiku Studios by Miles Deiaco and Olicía.
Mixed by Jakob Hegner.
Tape mastered by Jacob Korn at TailOut Studios.
Published and Copyright by o-cetera, oliciamusic.com, 2021.
Artwork by Carl-Johannes Schulze, studiosuspect.com and Jacob Stoy.
Photos by Marlene Rahmann.
Supported by Initiative Musik gGmbH with project funds from the Federal Government Commissioner for Culture and Media.